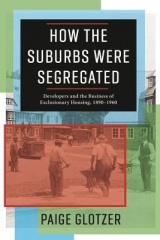 How the Suburbs Were Segregated

Developers and the Business of Exclusionary Housing, 1890-1960. Columbia Studies in the History of U.S. Capitalism

By (author) Paige Glotzer
Genres: History of the Americas, 20th century history: c 1900 to c 2000, Social discrimination, Ethnic studies, Housing law, Homelessness
Format: Hardback
Publisher: Columbia University Press, New York, United States
Published: 17th Apr 2020
Dimensions: w 152mm h 229mm
ISBN-10: 0231179987
ISBN-13: 9780231179980
Barcode No: 9780231179980
Synopsis
The story of the rise of the segregated suburb often begins during the New Deal and the Second World War, when sweeping federal policies hollowed out cities, pushed rapid suburbanization, and created a white homeowner class intent on defending racial barriers. Paige Glotzer offers a new understanding of the deeper roots of suburban segregation. The mid-twentieth-century policies that favored exclusionary housing were not simply the inevitable result of popular and elite prejudice, she reveals, but the culmination of a long-term effort by developers to use racism to structure suburban real estate markets. Glotzer charts how the real estate industry shaped residential segregation, from the emergence of large-scale suburban development in the 1890s to the postwar housing boom. Focusing on the Roland Park Company as it developed Baltimore's wealthiest, whitest neighborhoods, she follows the money that financed early segregated suburbs, including the role of transnational capital, mostly British, in the U.S. housing market. She also scrutinizes the business practices of real estate developers, from vetting homebuyers to negotiating with municipal governments for services. She examines how they sold the idea of the suburbs to consumers and analyzes their influence in shaping local and federal housing policies. Glotzer then details how Baltimore's experience informed the creation of a national real estate industry with professional organizations that lobbied for planned segregated suburbs. How the Suburbs Were Segregated sheds new light on the power of real estate developers in shaping the origins and mechanisms of a housing market in which racial exclusion and profit are still inextricably intertwined.

Submit your review
Newspapers & Magazines
Glotzer tackles a complicated subject with nuance and an attention to detail that is remarkable. While there are many highly acclaimed books on the history of housing segregation and racial exclusion in suburbia, none of these have approached the topic from the perspective of developers and capital investors, much less followed the money, in the way Glotzer has. -- Andrew W. Kahrl, author of <i>The Land Was Ours: How Black Beaches Became White Wealth in the Coastal South</i> In How the Suburbs Were Segregated, Glotzer offers a fresh and original history of suburban real estate development. Uncovering land ownership patterns and financing strategies in north Baltimore since the early nineteenth century, Glotzer tells the story of racial exclusion and residential segregation as it has never been told. -- Alison Isenberg, author of <i>Designing San Francisco: Art, Land, and Urban Renewal in the City by the Bay</i> This book is a remarkable achievement. Glotzer tells an eye-opening story about how real estate developers shaped a racially segregated Baltimore-and through their influence and example, the larger United States. By following the paper trail, we learn that racially prejudiced homeowners and government policymakers were not solely to blame, but rather were operating with a rulebook written by capitalist real estate interests who tied profits to racial exclusion for more than a century. -- Lizabeth Cohen, author of <i>Saving America's Cities: Ed Logue and the Struggle to Renew Urban America in the Suburban Age</i> Paige Glotzer's absorbing, vividly narrated study is a major contribution to the histories of capitalism and of American cities. She shows residential segregation's roots in longer histories of race and empire, flows of global capital, and the actions of powerful real estate developers long before the era of mass suburbanization. An essential text for understanding and grappling with the inequalities embedded within today's metropolitan landscapes. -- Margaret O'Mara, author of <i>The Code: Silicon Valley and the Remaking of America</i>
Cookies are disabled, please note some site features may not function correctly.