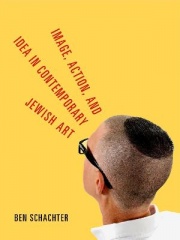 By (author) Ben Schachter
Genres: Art & design styles: from c 1960, Folk art, Judaism: worship, rites & ceremonies, Popular culture, History of art / art & design styles, Naive art
Format: Paperback / softback
Publisher: Pennsylvania State University Press, University Park, United States
Published: 15th Nov 2017
Dimensions: w 152mm h 203mm d 12mm
Weight: 363g
ISBN-10: 0271079126
ISBN-13: 9780271079127
Barcode No: 9780271079127
Synopsis
Contemporary Jewish art is a growing field that includes traditional as well as new creative practices, yet criticism of it is almost exclusively reliant on the Second Commandment's prohibition of graven images. Arguing that this disregards the corpus of Jewish thought and a century of criticism and interpretation, Ben Schachter advocates instead a new approach focused on action and process. Departing from the traditional interpretation of the Second Commandment, Schachter addresses abstraction, conceptual art, performance art, and other styles that do not rely on imagery for meaning. He examines Jewish art through the concept of melachot-work-like "creative activities" as defined by the medieval Jewish philosopher Maimonides. Showing the similarity between art and melachot in the active processes of contemporary Jewish artists such as Ruth Weisberg, Allan Wexler, Archie Rand, and Nechama Golan, he explores the relationship between these artists' methods and Judaism's demanding attention to procedure. A compellingly written challenge to traditionalism, Image, Action, and Idea in Contemporary Jewish Art makes a well-argued case for artistic production, interpretation, and criticism that revels in the dual foundation of Judaism and art history.

Submit your review
Newspapers & Magazines
"A valuable contribution to the expanding discussion of Jewish art. 'Action' as the consummate motif in the making of contemporary Jewish art may not be a new idea, but Schachter's articulation of it is new and the framing of it refreshing and, in many respects, original."-Ori Z. Soltes, Ars Judaica "This is a lively book. Rather than scraping over familiar territory regarding the Second Commandment (prohibiting graven images), Ben Schachter sketches out promising new paths for contemporary Jewish art that also reconnect with long-standing Jewish traditions. It's particularly welcome in the suddenly burgeoning field of Jewish art to hear from a scholar who is also an accomplished artist-and who studies his contemporaries with an eye for process as much as product."-Aaron Rosen, author of Art and Religion in the 21st Century "A highly original exploration of contemporary Jewish art practice and criticism at the convergence of theology and aesthetic theory. A welcome antidote to the preoccupation with the Second Commandment and Jewish aniconism."-Barbara Kirshenblatt-Gimblett, author of Destination Culture: Tourism, Museums, and Heritage "In this lively, stimulating (though in places repetitious) book, Schachter (fine arts, Saint Vincent College) takes as his point of departure the judicious observation that the study of Jewish art has unavoidably been constrained by the second commandment, which forbids the making of graven images. Recommended."-W. Cahn, Choice "In this manifesto Schachter seamlessly joins this growing chorus as a practicing artist, theoretician and critic."-Richard McBee, The Jewish Week "A meritorious work both for amalgamating past scholarship and for furthering the field as it relates to contemporary art. Much like the author, who is an expert in allowing viewers to see something new in a recognizable boundary, Image, Action, and Idea in Contemporary Jewish Art creates fresh space in a seemingly stationary setting."-Adam Reinherz, Pittsburgh Jewish Chronicle
Cookies are disabled, please note some site features may not function correctly.