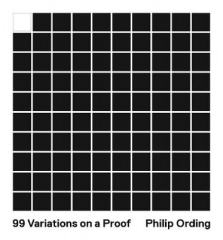 99 Variations on a Proof

By (author) Philip Ording
Genres: Mathematics, Algebraic geometry, Philosophy of mathematics, History of mathematics
Format: Hardback
Publisher: Princeton University Press, New Jersey, United States
Published: 5th Feb 2019
Dimensions: w 211mm h 239mm d 27mm
Weight: 930g
ISBN-10: 0691158835
ISBN-13: 9780691158839
Barcode No: 9780691158839
Synopsis
An exploration of mathematical style through 99 different proofs of the same theorem This book offers a multifaceted perspective on mathematics by demonstrating 99 different proofs of the same theorem. Each chapter solves an otherwise unremarkable equation in distinct historical, formal, and imaginative styles that range from Medieval, Topological, and Doggerel to Chromatic, Electrostatic, and Psychedelic. With a rare blend of humor and scholarly aplomb, Philip Ording weaves these variations into an accessible and wide-ranging narrative on the nature and practice of mathematics. Inspired by the experiments of the Paris-based writing group known as the Oulipo-whose members included Raymond Queneau, Italo Calvino, and Marcel Duchamp-Ording explores new ways to examine the aesthetic possibilities of mathematical activity. 99 Variations on a Proof is a mathematical take on Queneau's Exercises in Style, a collection of 99 retellings of the same story, and it draws unexpected connections to everything from mysticism and technology to architecture and sign language. Through diagrams, found material, and other imagery, Ording illustrates the flexibility and creative potential of mathematics despite its reputation for precision and rigor. Readers will gain not only a bird's-eye view of the discipline and its major branches but also new insights into its historical, philosophical, and cultural nuances. Readers, no matter their level of expertise, will discover in these proofs and accompanying commentary surprising new aspects of the mathematical landscape.

Submit your review
Newspapers & Magazines
"This book is an insightful addition to mathematical literature."---Robert Maddox-Harle, Leonardo Reviews "A Choice Outstanding Academic Title of the Year" "Ording presents ninety-nine proofs that a specific cubic equation has two real roots. The theorem itself is fairly uninteresting, but the proofs are the stars and each of them seeks to show a different aspect of the theory, history, or culture of mathematics."---Geoffrey Dietz, MAA Reviews "Winner of the PROSE Award for Excellence in Physical Sciences and Mathematics, Association of American Publishers" "Winner of the PROSE Award in Mathematics, Association of American Publishers" "[A] fascinating book. . . . The book can be recommended as light reading and, in particular, for everyone who wants to become more aware of the different styles used in mathematical writing."---C. Fuchs, International Mathematical News "This rather unusual book shows that . . . the essentials for communicating mathematical contents is not formulas, let alone numbers, but a more or less precise reasoning in a convincing language."---Jurgen Appell, Zentralblatt MATH "A deep and thoughtful examination of the nature of mathematical arguments, of mathematical style, and of proof itself."---Chris Sangwin, London Mathematical Newsletter
Cookies are disabled, please note some site features may not function correctly.