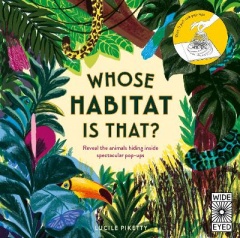 Whose Habitat is That?

Illustrated by Lucile Picketty
Genres: Wildlife (Children's/YA), Picture books, Pop-up & lift-the-flap books
Format: Hardback
Publisher: Wide Eyed Editions, London, United Kingdom
Published: 2nd Jul 2020
Dimensions: w 254mm h 248mm d 22mm
Weight: 1g
Interest age: From 5 to 8 years
ISBN-10: 0711254435
ISBN-13: 9780711254435
Barcode No: 9780711254435
Synopsis
A beautiful pop-up book as you've never seen before. Swing through the lush jungle canopy, crunch across the glittering ice floes, prowl through the savanna grasslands. In each habitat, a wild creature hides. Can you guess who they are from the clues they give about themselves? Lift the spectacular spiral pop up to reveal the answer and meet each magnificent animal in its home. Children learn what the animal eats, where it lives, what it looks like and what animal family it belongs to, as well as some quirky and funny facts about it. The reader then reveals by pulling up a tab on the opposite page, a creature suspended on a sturdy but invisible plastic cord. The creature appears in a whirlwind of spiralling paper at home in its natural environment. At the animal's feet is its name and so the pop up reveals the answer in a uniquely beautiful and satisfying way.