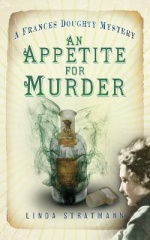 An Appetite for Murder

By (author) Linda Stratmann
Genres: Psychology, Family & relationships, Self-help & personal development, Historical fiction, Historical mysteries
Format: Paperback / softback
Publisher: The History Press Ltd, Stroud, United Kingdom
Published: 1st Apr 2011
Dimensions: w 128mm h 190mm d 21mm
Weight: 250g
ISBN-10: 0750954442
ISBN-13: 9780750954440
Barcode No: 9780750954440
Synopsis
The sudden death of overweight 49-year-old Thomas Whibley sparks off an acrimonious furore in Bayswater, and sparks fly between rival diet doctors, vegetarians and the extremist Pure Food Society. Young sleuth Frances Doughty is engaged to discover the author of anonymous libels, when a former colleague of Whibley's, Hubert Sweetman, who has served fourteen years in prison for a violent robbery he claims he did not commit, asks her to trace his estranged family. Before she can start, however, the police arrive and arrest her client for the murder of his wife. There will be more murders and a vicious attack on Frances before she finally resolves a number of knotty questions. Is Hubert Sweetman really innocent? Where are his missing children? And who wielded the poisoned pen? The fourth book in the popular Frances Doughty Mystery series.