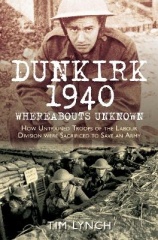 By (author) Tim Lynch
Genres: Military history, European history, 20th century history: c 1900 to c 2000, Second World War, War & defence operations
Format: Paperback / softback
Publisher: The History Press Ltd, Stroud, United Kingdom
Published: 6th Apr 2015
Dimensions: w 154mm h 236mm d 21mm
Weight: 490g
ISBN-10: 0750962275
ISBN-13: 9780750962278
Barcode No: 9780750962278
Synopsis
They called it `the slaughter of the innocents'. The barely trained and poorly equipped men of the Labour Divisions were never meant to fight, but when the German blitzkreig sliced through the Allied armies they were all that stood in the way of the annihilation of the British Expeditionary Force. Paying with their lives they bought precious time as the army fell back towards Dunkirk, and long after the last of the little ships reached home, the men of the Labour Divisions fought on. Dunkirk 1940: Whereabouts Unknown uses official reports, diaries and personal accounts to tell the story of the chaos, terror and heroism of the amateur soldiers of 137th Infantry Brigade during the fall of France.