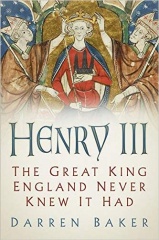 The Great King England Never Knew It Had

By (author) Darren Baker
Genres: Biography: royalty, Medieval history, Biography: historical, political & military, British & Irish history
Format: Paperback / softback
Publisher: The History Press Ltd, Stroud, United Kingdom
Published: 31st Oct 2019
Dimensions: w 157mm h 232mm d 37mm
Weight: 714g
ISBN-10: 0750992433
ISBN-13: 9780750992435
Barcode No: 9780750992435
Synopsis
Henry III (1207-72) was the longest-serving monarch of England until the modern era. His reign began with a minority in perpetual crisis and ended after the constitutional issues of the day had been settled on the battlefield. Nevertheless, most of his fifty-six years on the throne were peaceful and prosperous, and saw extraordinary achievements, from the rise of the parliamentary state to the great cathedrals of the land - including Henry's own enduring contribution, Westminster Abbey. Here, historian Darren Baker presents a detailed account of this fascinating and much maligned monarch who was able to survive at a time when others didn't.

Submit your review
Newspapers & Magazines
Darren Baker paints an unforgettable portrait that allows every reader of this book to come away with a deeper understanding of medieval kingship and the determination of one king in particular to survive and save his dynasty in very difficult political circumstances. -- Michael Clanchy
Cookies are disabled, please note some site features may not function correctly.