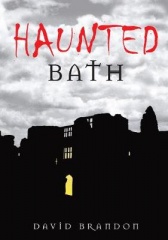 By (author) David Brandon
Genres: Ghosts & poltergeists, Local history
Format: Paperback / softback
Publisher: The History Press Ltd, Stroud, United Kingdom
Published: 10th Mar 2009
Dimensions: w 153mm h 225mm d 1mm
Weight: 230g
ISBN-10: 0752447599
ISBN-13: 9780752447599
Barcode No: 9780752447599
Synopsis
A pub with a deceased barmaid who simply refuses to leave, a Grey Lady in the Theatre Royal; a poltergeist in the Garrick's Head pub; a man in a black hat at the Assembly Rooms. Bath is one of the few British cities which may justifiably be called beautiful. It is also one of the most haunted of British cities. Bath is an ancient place and, at the height of its fashionable popularity in the eighteenth century, it was almost the country's alternative capital and the scene of social intrigues and skulduggery of the sort that its ghosts seem to reflect. Even the Circus, regarded as the epitome of the classical in domestic architecture, has a ghostly young lady who sings. This book combines a love and appreciation of Bath with the recounting of tales about its best-known ghosts. David has also researched local archives to find less familiar phantoms, spooks and spectres.