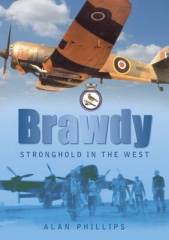 Stronghold in the West

By (author) Alan Phillips
Genres: Local history
Format: Paperback / softback
Publisher: The History Press Ltd, Stroud, United Kingdom
Published: 1st Jun 2009
Dimensions: w 158mm h 233mm d 13mm
Weight: 340g
ISBN-10: 0752449230
ISBN-13: 9780752449234
Barcode No: 9780752449234
Synopsis
Completed in 1944 as a satellite airfield to nearby St David's, Brawdy soon supplanted its parent for meteorological reasons. Used initially by RAF Coastal Command, it passed to the Royal Navy in 1946, becoming HMS Goldcrest. The base was used by the Navy up to 1974, when the RAF resumed control once again. Used as an advanced training facility, Hunters and later Hawks were based there, as was a secret US Navy Oceanographic Research unit. Since 1996, Brawdy has been used by the Army. For many, Brawdy was also synonymous with the air displays held there for many years and for its search and rescue role, making it a widely known location.