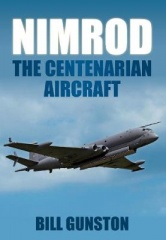 By (author) Bill Gunston
Genres: Military aircraft, Aircraft: general interest
Format: Paperback / softback
Publisher: The History Press Ltd, Stroud, United Kingdom
Published: 27th Oct 2009
Dimensions: w 172mm h 247mm d 13mm
Weight: 449g
ISBN-10: 0752452703
ISBN-13: 9780752452708
Barcode No: 9780752452708
Synopsis
For the first time, this book traces the complete history of the world's first jet airliner, and how this aircraft was developed from the civil airliner the Comet into a succession of military aircraft named Nimrod, which has been the RAF's primary Maritime Patrol Aircraft since the 1970s. It includes much previously unpublished data, including information on a remarkable Nimrod version that was unfortunately abandoned, and a version that was previously kept secret. Written by highly respected aviation expert Bill Gunston, "Nimrod: The Centenarian Aircraft" includes cutaway drawings for each aircraft, detailed numerical data, and is the first publication to record dangerous problems with a vitally important RAF aircraft.