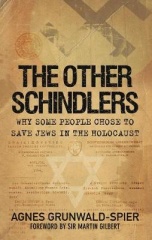 Why Some People Chose to Save Jews in the Holocaust

By (author) Agnes Grunwald-Spier
Genres: European history, 20th century history: c 1900 to c 2000, The Holocaust
Format: Paperback / softback
Publisher: The History Press Ltd, Stroud, United Kingdom
Published: 26th Apr 2010
Dimensions: w 131mm h 198mm d 11mm
Weight: 330g
ISBN-10: 0752459678
ISBN-13: 9780752459677
Barcode No: 9780752459677
Synopsis
Thanks to Thomas Keneally's book Schindler's Ark, and the film based on it, Schindler's List, we have become more aware of the fact that, in the midst of Hitler's extermination of the Jews, courage and humanity could still overcome evil. While 6 million Jews were murdered by the Nazi regime, some were saved through the actions of non-Jews whose consciences would not allow them to pass by on the other side, and many are honoured by Yad Vashem as 'Righteous Among the Nations' for their actions. As a baby, Agnes Grunwald-Spier was herself saved from the horrors of Auschwitz by an unknown official, and is now a trustee of the Holocaust Memorial Day Trust. She has collected together the stories of thirty individuals who rescued Jews, and these provide a new insight into why these people were prepared to risk so much for their fellow men and women. With a foreword by Sir Martin Gilbert, one of the leading experts on the subject, this is an ultimately uplifting account of how some good deeds really do shine in a weary world.

Submit your review
Newspapers & Magazines
'In my lifetime I have read some 300+ books about the Holocaust. I can unequivocally say that Agnes Grunwald-Spier's The Other Schindlers is one of the best Holocaust books I have read in the last few years. Superbly researched, beautifully written, Ms Grunwald-Spier brings vividly to life the stories of some of the people who risked everything to help Jews when everyone else could seemingly care less. This is a book to cherish and one to be consulted repeatedly in the years to come.' Anthony Anderson, Holocaust Studies Librarian, University of Southern California
Cookies are disabled, please note some site features may not function correctly.