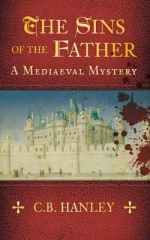 Sins of the Father

By (author) C. B. Hanley
Genres: Historical fiction, History
Format: Paperback / softback
Publisher: The History Press Ltd, Stroud, United Kingdom
Published: 1st Jul 2012
Dimensions: w 121mm h 224mm d 19mm
Weight: 280g
ISBN-10: 075248091X
ISBN-13: 9780752480916
Barcode No: 9780752480916
Synopsis
1217: England has been invaded. Much of the country is in the iron grip of Louis of France and his collaborators, and civil war rages as the forces of the boy king try to fight off the French. Most of this means nothing to Edwin Weaver, son of the bailiff at Conisbrough Castle in Yorkshire, until he is suddenly thrust into the noble world of politics and treachery: he is ordered by his lord the earl to solve a murder which might have repercussions not just for him but for the future of the realm. Edwin is terrified but he must obey; he takes on the challenge and learns more until he uncovers a horrific secret which has been dead and buried for fifteen years, a secret which might kill them all - and realises there are some questions to which he might not wish to know the answers. The first book in C.B. Hanley's popular Mediaeval Mystery series.

Submit your review
Newspapers & Magazines
"An admirable debut...With just enough red herrings for those who delight in puzzling out identities and motives, the mystery may be solved by some readers before the brand-new sleuth uncovers the killer. Excellent crossover appeal for historical fiction buffs as well." -- Library Journal
Cookies are disabled, please note some site features may not function correctly.