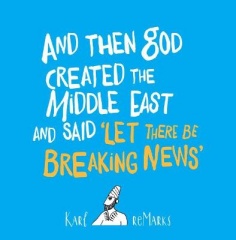 By (author) Karl reMarks
Genres: Humour collections & anthologies, Gift books
Format: Paperback / softback
Publisher: Saqi Books, London, United Kingdom
Published: 4th Jun 2018
Dimensions: w 126mm h 134mm d 14mm
Weight: 150g
ISBN-10: 0863569021
ISBN-13: 9780863569029
Barcode No: 9780863569029
Synopsis
`You may wonder why the Middle East gets so much airtime. Well, regions of the world were competing to host the apocalypse and the Middle East won.' Online sensation Karl reMarks disagreed with the idea that reality had become too strange to satirise. Then he read that bin Laden was radicalised by Shakespeare. Since then, Karl has been bringing the best of the Middle East news and views to his followers around the world. Now Karl's wildly wry observations and sketches are available in one handy collection. With sections on `Geography for Dummies', `Democracy for Realists' and `Extremism: A Study', alongside the best of Karl reMarks's infamous `Bar Jokes', this hilarious book proudly presents views you're guaranteed not to hear on the news ... We're actually very proud of God in the Middle East. He's the local guy who went on to acquire international fame. Wahahahahabism: A fundamentalist Middle Eastern comedy movement. Twelve people just started to follow me. Jesus.