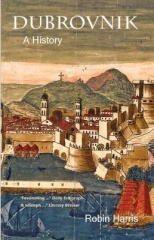 By (author) Robin Harris
Genres: European history
Format: Paperback / softback
Publisher: Saqi Books, London, United Kingdom
Published: 31st Jan 2006
Dimensions: w 163mm h 231mm d 19mm
Weight: 1000g
ISBN-10: 0863569595
ISBN-13: 9780863569593
Barcode No: 9780863569593
Synopsis
Since emerging as a settlement in the seventh century, Dubrovnik held a significant position beyond what could have been expected of this tiny city-state. Its merchants, trading throughout the huge Ottoman Empire, enjoyed privileges denied to other Western states. A politically skilled and commercially enterprising ruling class took every opportunity to maximise the Republic's wealth. Dubrovnik also faced the extreme dangers posed by Venetian aggressors, Ottoman plotters, a terrible earthquake in 1667 and, finally, the will of Napoleon. In 1991-92, the city survived the besieging Yugoslav army, which heavily damaged but did not destroy Dubrovnik's cultural heritage. This book is a comprehensive history of Dubrovnik's progress over twelve centuries of European development, encompassing arts, architecture, social and economic changes and the traumas of war and politics.

Submit your review
Newspapers & Magazines
*'Detailed, scholarly and eminently readable, Dubrovnik is a triumph of book production. This is a splendid volume.' Literary Review 'There are few introductions to the city's past available to general readers ... Harris's splendid study meets this need admirably.' TLS 'Learned, fluently written and lavishly illustrated.' The Sunday Telegraph 'A fascinating and scholarly account.' The Daily Telegraph 'A triumph to set beside those of the great journalists.' Michael Foot, Tribune 'Harris offers up an intense look at a curious world. Truly fascinating.' Good Book Guide 'Unravelling the complex history of Dubrovnik takes skills of a high order, and Robin Harris has these.' Professor Norman Stone 'Splendid ... the book about Dubrovnik we have all been waiting for.' Dr Noel Malcolm, author of Bosnia: A Short History and Kosovo: A Short History 'Robin Harris has written a splendid and discerning history of Croatia's Adriatic pearl.' Professor Ivo Banac, Yale University
Cookies are disabled, please note some site features may not function correctly.