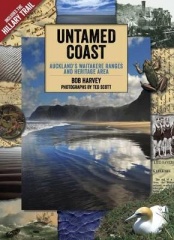 By (author) Bob Harvey
Photographs by Ted Scott
Genres: Local history, Travel & holiday guides, Places & peoples: pictorial works
Format: Paperback / softback
Publisher: Exisle Publishing, Auckland, New Zealand
Published: 1st Nov 2012
Dimensions: w 210mm h 286mm d 13mm
Weight: 794g
ISBN-10: 0908988672
ISBN-13: 9780908988679
Barcode No: 9780908988679
Synopsis
The Waitakere Ranges and West Coast beaches are sublime jewels in Auckland's landscape. Tens of thousands of people visit the area each year, attracted by the many walks, spectacular views, native wildlife, fishing and superb surfing beaches. In recent years the Waitakeres have been showcased internationally through films like The Piano and Memory and Desire, and television series such as Xena and Hercules. In 'Untamed Coast', Bob Harvey not only describes the natural beauty of the Waitakeres, but also outlines the ancient Maori history, the more recent pioneering past, and profiles some of the area's main characters - adding many fascinating anecdotes and stories not found elsewhere. He also includes detailed guides (with maps) to many of the recreational walks in the ranges, and a special feature of this new edition is a separate section on the newly opened Hillary Trail. Ted Scott's splendid photographs add richness to the book, making this one of the finest local tourist books ever published in New Zealand.