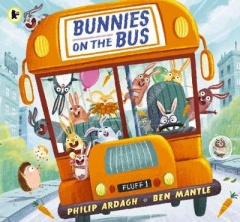 Bunnies on the Bus

By (author) Philip Ardagh
Illustrated by Ben Mantle
Genres: Picture storybooks
Format: Paperback / softback
Publisher: Walker Books Ltd, London, United Kingdom
Published: 1st Mar 2020
Dimensions: w 270mm h 250mm d 4mm
Weight: 190g
Interest age: From 3 to 7 years
ISBN-10: 1406394017
ISBN-13: 9781406394016
Barcode No: 9781406394016
Synopsis
Watch out! Move out of the way! Hold onto your tails! There are ... BUNNIES ON THE BUS! And they aren't stopping for ANYONE! The bunnies have taken over the bus and they're on a wild ride across the streets of Sunnytown! They whizz past the bus stop, swerve around corners and zoom over crossings on a non-stop roller coaster adventure! There are bunnies on the roof! Bunnies in the aisle! DO sit down, bunnies, or you'll end up in a pile! Eventually, they come to a stop ... at the train station. And what's that they've spotted? A TRAIN! Uh-oh, here we go again... A hilarious romp of a book, with a fantastic read-aloud rhyming text and spectacular illustrations.

Submit your review
Newspapers & Magazines
This book is SO perfect for little ones that love repetitive and rhyming books - Isaac loved this one and caught on to the words so quickly so he was able to join in 'reading' it with me. The illustrations are so so good and all the animals involved (there's not just bunnies!) really stand out and we enjoyed looking at them all and talking about what everyone was doing! * Reader via Toppsta * Featured in Parent Talk. * Parent Talk * Featured in Mums & Tots. * Mums & Tots * Bunnies On The Bus is fast-paced, furious and easy to remember, so even the youngest will quickly join in. The bright and (very) lively illustrations add to the hilarity and bring in some intriguing sub-plots. Delightful, hysterical and SO MUCH FUN! * Fallen Star Stories Blog * The relentless anarchy and fruity rhyming scheme makes for a thrilling ride for younger children and their tongue-twisted parents. To be chanted at high speed and followed by a little lie-down. * The Times, Children's Book of the Week *
Cookies are disabled, please note some site features may not function correctly.