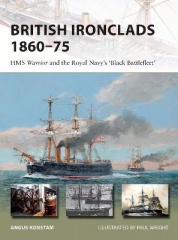 By (author) Angus Konstam
Illustrated by Paul Wright
Genres: Military history, Warfare & defence, British & Irish history, Modern history to 20th century: c 1700 to c 1900, Military & naval ships
Format: Paperback / softback
Publisher: Bloomsbury Publishing PLC, United Kingdom
Imprint: Osprey Publishing
Published: 18th Sep 2018
Dimensions: w 185mm h 248mm d 4mm
Weight: 168g
ISBN-10: 1472826892
ISBN-13: 9781472826893
Barcode No: 9781472826893
Synopsis
In November 1859, the French warship La Gloire was launched. She was the world's first seagoing ironclad - a warship built from wood, but whose hull was clad in a protective layer of iron plate. Britain, not to be outdone, launched her own ironclad the following year - HMS Warrior - which, when she entered service, became the most powerful warship in the world. Just like the Dreadnought half a century later, this ship changed the nature of naval warfare forever, and sparked a frantic arms race. The elegant but powerful Warrior embodied the technological advances of the early Victorian era, and the spirit of this new age of steam, iron and firepower. Fully illustrated with detailed cutaway artwork, this book covers the British ironclad from its inception and emergence in 1860, to 1875, a watershed year, which saw the building of a new generation of recognisably modern turreted battleships.

Submit your review
Newspapers & Magazines
"Provides a concise summary of the ships that were a transition between the wooden walls of Lord Nelson and the battleships of the late nineteenth, early twentieth centuries. It was a critical time period in naval architecture and this New Vanguard release provides a nice entry point to the topic." - IPMS / USA
Cookies are disabled, please note some site features may not function correctly.