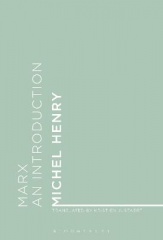 By (author) Michel Henry
Translated by Kristien Justaert
Genres: Western philosophy, from c 1900 -, Social & political philosophy, Marxism & Communism
Format: Paperback / softback
Publisher: Bloomsbury Publishing PLC, London, United Kingdom
Imprint: Bloomsbury Academic
Published: 21st Feb 2019
Dimensions: w 129mm h 198mm d 10mm
Weight: 160g
ISBN-10: 1474277780
ISBN-13: 9781474277785
Barcode No: 9781474277785
Synopsis
According to Michel Henry, no thinker has been more influential than Marx, and no one has been more misunderstood. With his characteristic clarity and elegance, Henry seeks to pull out the philosophical heart of Marx's work and the reasons this complex philosophy has so often been simplified, distorted and obscured. Marx: An Introduction is not just a recovery of the theoretical centre of Marx's thinking, but also a brilliant introduction to the work of Marx in general; concise and punchy without glossing over the difficult material, it provides a totally fresh reading of Marx's corpus. Michel Henry shares with Marx a concern for the living work and the living individual and this shared preoccupation is brilliantly conveyed throughout the book. An essential read for those wrestling with Marx for the first time, and those looking for a new way to approach well-trodden territory.

Submit your review
Newspapers & Magazines
Given its brevity, this is a remarkable introduction to Marx's thought. But more importantly, It is a great introduction to Henry's philosophy of life. Rejecting the then contemporary readings of Marx (Althusser in particular), rejecting the legacy of Marxism, Henry argues that economic structures are not the foundation for human life. For Marx, the concrete, living individual grounds economic structures. Life is the foundation. Therefore, as Henry concludes, "Marx's thought confronts us with the abyss of the question: what is life?" * Leonard Lawlor, Sparks Professor of Philosophy and Director of Graduate Studies in Philosophy, Penn State University, USA * In this highly accessible work, we are introduced not only to Marx but to Henry's vitalisation of Marx, one where the subject is immanent to the world through its living labour, and where Henry concludes that Marx's thought puts us before the 'abyss of the question: What is life?' In Henry's Introduction, Marx's thought lives on in every sense * John O Maoilearca, Professor of Film, Kingston University, London, UK *
Cookies are disabled, please note some site features may not function correctly.