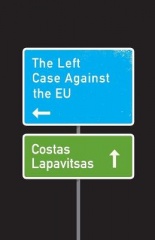 The Left Case Against the EU

By (author) Costas Lapavitsas
Genres: Political economy, EU & European institutions
Format: Paperback / softback
Publisher: Polity Press, Oxford, United Kingdom
Published: 19th Oct 2018
Dimensions: w 139mm h 208mm d 19mm
Weight: 255g
ISBN-10: 1509531068
ISBN-13: 9781509531066
Barcode No: 9781509531066
Synopsis
Many on the Left see the European Union as a fundamentally benign project with the potential to underpin ever greater cooperation and progress. If it has drifted rightward, the answer is to fight for reform from within. In this iconoclastic polemic, economist Costas Lapavitsas demolishes this view. He contends that the EU's response to the Eurozone crisis represents the ultimate transformation of the union into a neoliberal citadel that institutionally embeds austerity, privatization, and wage cuts. Concurrently, the rise of German hegemony has divided the EU into an unstable core and dependent peripheries. These related developments make the EU impervious to meaningful reform. The solution is therefore a direct challenge to the EU project that stresses popular and national sovereignty as preconditions for true internationalist socialism. Lapavitsas's powerful manifesto for a left opposition to the EU upends the wishful thinking that often characterizes the debate and will be a challenging read for all on the Left interested in the future of Europe.

Submit your review
Newspapers & Magazines
"For those wanting a clear and concise summary of the left case against the euro and of the misrepresentation of German European hegemony as the consummation of the "European idea", there is no way around this book. Nowhere has the political economy of the common currency and of German ascendancy in Europa been more clearly exposed. There is now no excuse anymore for denying or ignoring the disastrous consequences of German predominance, as established through the euro, for the unity of Europe and for the great majority of its citizens."Wolfgang Streeck, Max Planck Institute for the Study of Societies

"Costas Lapavitsas is the most important commentator on the EU and its current crises, including Brexit. This is one of the most significant books on modern politics to appear in the last decade, and virtually the only one fully to grasp the nature of our present situation."Richard Tuck, Harvard University

"Important and timely"
E-International Relations
'In 2015, a left-wing government in Athens was wrestling with Berlin and Brussels. Two prominent economists took part in the scuffle: one, Yanis Varoufakis, became Minister of Finance; the other, Costas Lapavitsas, was a member of the ruling party, Syriza. The first was a Europhile who viewed the capitulation of Prime Minister Alexis Tsipras as an invitation to struggle for "another Europe". The second, always the sceptic, saw his views confirmed by the debacle.'
Le Monde Diplomatique

'Expedient, informed and lucid.'
LSE Review of Books
Cookies are disabled, please note some site features may not function correctly.