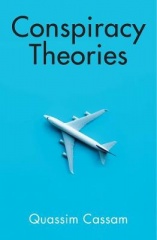 By (author) Quassim Cassam
Genres: Political science & theory
Format: Paperback / softback
Publisher: Polity Press, Oxford, United Kingdom
Published: 13th Sep 2019
Dimensions: w 112mm h 185mm d 6mm
Weight: 170g
ISBN-10: 1509535837
ISBN-13: 9781509535835
Barcode No: 9781509535835
Synopsis
9/11 was an inside job. The Holocaust is a myth promoted to serve Jewish interests. The shootings at Sandy Hook Elementary School were a false flag operation. Climate change is a hoax perpetrated by the Chinese government. These are all conspiracy theories. A glance online or at bestseller lists reveals how popular some of them are. Even if there is plenty of evidence to disprove them, people persist in propagating them. Why? Philosopher Quassim Cassam explains how conspiracy theories are different from ordinary theories about conspiracies. He argues that conspiracy theories are forms of propaganda and their function is to promote a political agenda. Although conspiracy theories are sometimes defended on the grounds that they uncover evidence of bad behaviour by political leaders, they do much more harm than good, with some resulting in the deaths of large numbers of people. There can be no clearer indication that something has gone wrong with our intellectual and political culture than the fact that conspiracy theories have become mainstream. When they are dangerous, we cannot afford to ignore them. At the same time, refuting them by rational argument is difficult because conspiracy theorists discount or reject evidence that disproves their theories. As conspiracy theories are so often smokescreens for political ends, we need to come up with political as well as intellectual responses if we are to have any hope of defeating them.

Submit your review
Newspapers & Magazines
Quassim Cassam has done the world a great service. This short, bracing and easily accessible book is not only a compelling read - it is also a much-needed weapon in the war against lies and the battle for truth. Methodically, he takes apart the mindset of the conspiracy theorist and shows why such theories arise, why they appeal and why they cause real damage. Truth has taken a battering in recent years. Now, thanks to Cassam, the truth is hitting back.
Jonathan Freedland
Cookies are disabled, please note some site features may not function correctly.