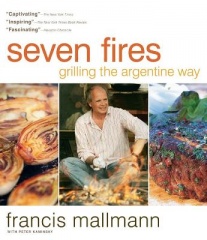 By (author) Francis Mallmann
Genres: National & regional cuisine, Cooking with specific gadgets
Format: Hardback
Publisher: Artisan, New York, United States
Imprint: Artisan Division of Workman Publishing
Published: 22nd Apr 2009
Dimensions: w 224mm h 261mm d 23mm
Weight: 1335g
ISBN-10: 1579653545
ISBN-13: 9781579653545
Barcode No: 9781579653545
Synopsis
The Argentines grill more meat per capita than any nation on earth. Francis Mallmann was raised in the mountains of Patagonia, trained in the great kitchens of Europe, and returned home to become the top chef in Buenos Aires and the biggest star on South American food television. In 1995 he gave up cooking fancy food and applied all the lessons of haute cuisine to maximizing flavor and texture with wood-fired cookery. His food is astoundingly bright and vivid with burnt, crusty tastes both rustic and refined. Recipes range across the menu, including non-grilled recipes for what to eat while you're building the fire. Most recipes are adapted for cooking indoors, so this is a cookbook for any season, any kitchen. Francis' seven fires are: Chapa - a cast iron griddle or skillet (the form most used in this book); Little Hell - cooking with fire above and below the food; Parilla - basically what's called barbecuing or grilling in the US; Horno de Barro - cooking in a wood-fired clay oven; Rescoldo - cooking food by burying in hot embers and ashes; Asador - cooking whole pigs or lambs affixed to an iron cross that faces a bonfire; and, Caldero - cooking in an iron cauldron or Dutch oven.

Submit your review
Newspapers & Magazines
"This captivating book about cooking over wood is as straightforward as it is appealing."
--New York Times "Glorious . . . You could amuse yourself all summer long exploring Mallmann's methods. His cooking is utterly unpretentious."
--Fine Cooking

"Seven Fires is, in its essence, a love letter to Argentina's obsession with fire and food."
--Epicurious

"[Mallmann] reconnects us to the primal simplicity and visceral pleasure of cooking over a fire."
--New York Times

"Argentinean chef Francis Mallmann presents a gorgeous volume detailing seven approaches to grilling. What will keep cooks coming back, however, are rustic dishes like burnt tomatoes with fennel and mustard vinaigrette; pork chops with honey gremolata; and boneless ribeye with chimichurri. Augmented with plenty of smoky photos, the only thing readers will lack is the smell of charcoal."
--Publishers Weekly starred review
Cookies are disabled, please note some site features may not function correctly.