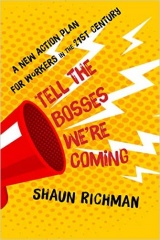 A New Action Plan for Workers in the Twenty-first Century

By (author) Shaun Richman
Genres: Political activism, Trade unions
Format: Hardback
Publisher: Monthly Review Press,U.S., New York, United States
Published: 22nd Jul 2020
Dimensions: w 152mm h 229mm d 20mm
Weight: 500g
ISBN-10: 1583678565
ISBN-13: 9781583678565
Barcode No: 9781583678565
Synopsis
Lengthening hours, lessening pay, no parental leave, scant job security. Never have so many workers needed so much support. Yet the very labour unions that could garner us protections and help us speak up for ourselves are growing weaker every day. In an age of rampant inequality, of increasing social protest and strikes-and when a majority of workers say they want to be union members - why does union density continue to decline? In this compelling new book, Shaun Richman offers some answers. But bringing unions back from the edge of institutional annihilation, says Richman, is no simple proposition. The next few years offer a rare opportunity to undo the great damage wrought on labour by decades of corporate union-busting, if only union activists raise our ambitions. Based on deft historical research and legal analysis, as well as his own experience as a union organizing director, Richman lays out an action plan for U.S. workers in the twenty-first century by which we can internalize the concept that workers are equal human beings, entitled to health care, dignity, job security-and definitely, the right to strike. Unafraid to take on some of the labour movement's sacred cows, this book describes what it would take-some changes that are within activists' power and some that require meaningful legal reform-to put unions in workplaces across America.

Submit your review
Newspapers & Magazines
"Shaun Richman is a critical voice in the fight for workers' rights in the New Gilded Age and Tell the Bosses is a manifesto for real change to give workers power over their jobs."-Erik Loomis, author, A History of America in Ten Strikes
Cookies are disabled, please note some site features may not function correctly.