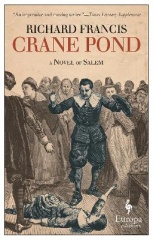 By (author) Richard Francis
Genres: Historical fiction
Format: Paperback
Publisher: Europa Editions, New York, United States
Published: 4th Oct 2016
Dimensions: w 135mm h 210mm d 25mm
Weight: 434g
ISBN-10: 1609453514
ISBN-13: 9781609453510
Barcode No: 9781609453510
Synopsis
Richard Francis's stunning novel Crane Pond is the story of Samuel Sewall, loving father and husband, anti-slavery advocate, defender of Native American rights, and presiding judge at the Salem Witchcraft Trials in 1692, where he sentenced 20 innocent women to death. He was the only judge to later admit his terrible mistake, and ask for forgiveness. At once a searing view of the Trials from the inside out, an empathetic portrait of one of the period's most tragic and redemptive figures, and an indictment of the malevolent power of religious and political idealism.