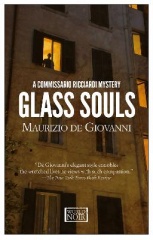 By (author) Maurizio Giovanni
Genres: Crime & mystery
Format: Paperback
Publisher: Europa Editions, New York, United States
Published: 20th Jul 2017
Dimensions: w 132mm h 207mm d 29mm
Weight: 465g
ISBN-10: 160945409X
ISBN-13: 9781609454098
Barcode No: 9781609454098
Synopsis
In the abyss of a profound personal crisis, Commissario Ricciardi feels unable to open himself up to life. He has refused the love of both Enrica and Livia and the friendship of his partner. Contentment for Ricciardi proves as elusive as clues to his latest case. The beautiful countess Bianca, pleads with him to investigate an officially closed case. In the tense, charged atmosphere of 1930s Italy, where Benito Mussolini and his fascist thugs monitor the police, an unauthorized investigation is grounds for immediate dismissal. But Ricciardi's thirst for justice cannot be sated.