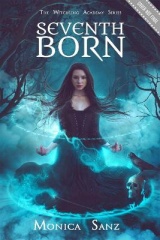 By (author) Monica Sanz
Genres: Fantasy & magical realism (Children's/YA)
Format: Paperback / softback
Publisher: Entangled Publishing, LLC, Fort Collins, United States
Published: 10th Sep 2018
Dimensions: w 135mm h 210mm d 33mm
Weight: 400g
ISBN-10: 1640631925
ISBN-13: 9781640631922
Barcode No: 9781640631922
Synopsis
Abomination. Curse. Murderer. That is what eighteen-year-old Seraphina Dovetail is considered by her coven. As the seventh-born daughter to a witch, she is the cause of her mother losing her powers and, in turn, her life. Abandoned at an early age, Sera dreams of becoming an inspector and finding her family. Maybe they didn't mean to give her up. Maybe, just maybe, they think of her, too. To reach her goal, she must be referred into the Advanced Studies Program at the Aetherium. Her birth order, quick temper, and constant mishaps, however, have left her as an outcast with failing marks. And just the person Professor Nikolai Barrington is looking for. He makes her a proposition she can't refuse: become his assistant and he'll give her the referral she needs. Sera agrees and is quickly thrust into a world where witches are being kidnapped, bodies are being raised from the dead, and someone is burning seventh-borns alive. With Professor Barrington, Sera will discover that not everyone wants to be found, some secrets are best left buried, and fire isn't the only thing that makes a witch burn.