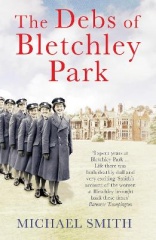 The Debs of Bletchley Park

By (author) Michael Smith
Genres: History, British & Irish history, Second World War, 20th century history: c 1900 to c 2000, Espionage & secret services
Format: Paperback / softback
Publisher: Aurum Press, London, United Kingdom
Published: 18th Jun 2015
Dimensions: w 137mm h 200mm d 20mm
Weight: 230g
ISBN-10: 1781313881
ISBN-13: 9781781313886
Barcode No: 9781781313886
Synopsis
For Winston Churchill the men and women at Bletchley Park were ' the geese the laid the golden eggs' , providing important intelligence that led to the Allied victory in the Second World War. At the peak of Bletchley' s success, a total of twelve thousand people worked there of whom more than eight thousand were women. These included a former ballerina who helped to crack the Enigma Code; a debutante working for the Admiralty with a direct line to Churchill; the convent girl who operated the Bombes, the top secret machines that tested Enigma settings; and the German literature student whose codebreaking saved countless lives at D-Day. All these women were essential cogs in a very large machine, yet their stories have been kept secret. In The Debs of Bletchley Park author Michael Smith, trustee of Bletchley Park and chair of the Trust' s Historical Advisory Committee, tells their tale. Through interviews with the women themselves and unique access to the Bletchley Park archives, Smith reveals how they came to be there, the lives they gave up to do ' their bit' for the war effort, and the part they played in the vital work of ' Station X' . They are an incredible set of women, and this is their story.

Submit your review
Newspapers & Magazines
'Comprehensive...movingly portrayed ... Smith provides a useful corrective to the many accounts that see Turing as the lone central figure at Bletchley.'

'If you are looking for a riveting, un-put-downable read to curl up with on a Siberian January night - look no further than Michael Smith's marvellous book - The Debs of Bletchley Park'

'Brisk and readable story of the women of Bletchley ... Smith is good on what the women actually did'

'Pacey and easy to read ... a fascinating account of how the war changed life for women in all strata of society'

"A fascinating account ... long overdue." 'If you are looking for a riveting, un-put-downable read to curl up with on a Siberian January night - look no further than Michael Smith's marvellous book - The Debs of Bletchley Park' "A fascinating account ... long overdue." "A five star comprehensive and emotionally engaging read."
Cookies are disabled, please note some site features may not function correctly.