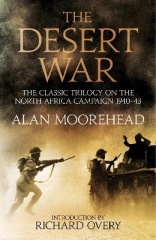 The classic trilogy on the North African campaign 1940-1943

By (author) Alan Moorehead
Foreword by Richard Overy
Genres: Second World War, African history, 20th century history: c 1900 to c 2000, Battles & campaigns
Format: Hardback
Publisher: Aurum Press, London, United Kingdom
Published: 28th Jun 2017
Dimensions: w 152mm h 243mm d 55mm
Weight: 1120g
ISBN-10: 1781316732
ISBN-13: 9781781316733
Barcode No: 9781781316733
Synopsis
An epic account of the entire war in North Africa from 1940-1943 from peerless war correspondent Alan Moorehead CBE, published to commemorate the 75th anniversary of the Battles for El Alamein in July and October 1942. Moorehead's classic trilogy on the North Africa campaign and the prolonged battles between Montgomery's Eighth Army and Rommel's Afrika Corps immediately drew universal acclaim, and remains an epic account as extraordinary now as it was then. This lavish new edition features an introduction from world renowned historian and Wolfson Prize-winner Professor Richard Overy. In 1940, Alan Moorehead was sent to cover the North Africa campaign by the Daily Express, and he followed its dramatic course all the way to 1943. The three books he subsequently wrote about the Desert War - later collected as his 'African Trilogy' - were swiftly acclaimed as a classic account of the tussle between Montgomery's Eighth Army and Rommel's Afrika Corps, amidst the endless harsh wastes of the Western Desert. Moorehead was responsible for the celebrated insight that 'tank battles in the desert are like battles at sea, the lumbering tanks like ships lost in a vast ocean of sand.'

Submit your review
Newspapers & Magazines
'A timely reissue of Moorehead's classic trilogy in one omnibus edition. Established as a masterpiece.' * Military History Monthly * 'As a narrative history, it effortlessly engages the reader. It is a timeless work.' * Soldier Magazine * 'A classic' * Observer * 'One of the most remarkable books of this or any other modern war' * New Statesman * 'It's brilliant. The book is fabulous... he had a lot of perception about the lives of those he was writing about' -- Jeremy Bowen * The Today Programme *
Cookies are disabled, please note some site features may not function correctly.