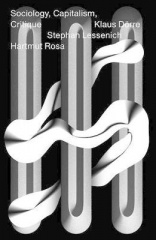 By (author) Hartmut Rosa, Klaus Dorre, Stephan Lessenich
Genres: Sociology, Social theory
Format: Hardback
Publisher: Verso Books, London, United Kingdom
Published: 7th May 2015
Dimensions: w 129mm h 198mm d 25mm
Weight: 542g
ISBN-10: 1781689318
ISBN-13: 9781781689318
Barcode No: 9781781689318
Synopsis
The first step towards changing the system is to analyze and understand it. Intellectuals play a key role in this process - and social scientists in particular. In Sociology, Capitalism, Critique, Klaus Dorre, Stephan Lessenich, and Hartmut Rosa bring the critique of capitalism back to the top of the agenda, placing it at the heart of sociology. By discussing key critical issues such as the questions of accumulation and expropriation, discipline and freedom, and the powerful new sociological concepts of activation and acceleration, they reclaim a socially committed sociology, taking the side of the potential losers of the current crisis and in more general terms placing the future well-being of society at the center of their research.

Submit your review
Newspapers & Magazines
"'Wherever you look these days, ' wrote the German sociologists Klaus Doerre, Stephan Lessenich and Hartmut Rosa, 'the critique of capitalism has become quite fashionable.' Their book Sociology, Capitalism, Critique is not just fashionable: instead it resuscitates critical theory for new times, and takes the side of the losers in the financial crisis."
--Stuart Jeffries, Guardian "An original triptych of German sociological critiques of current capitalism which deserves to be read in the anglophone world."
--Goeran Therborn, Professor Emeritus of Sociology, University of Cambridge

"Here is the eagerly awaited translation of Doerre, Lessenich and Rosa's original diagnosis of the destructive dynamics of contemporary capitalism and its legitimation crises. Rejuvenating the great German tradition of critical theory, they offer a brilliant three-way debate that reignites both sociology and Marxism."
--Michael Burawoy, Professor of Sociology, University of California, Berkeley
Cookies are disabled, please note some site features may not function correctly.