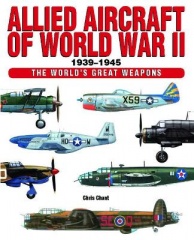 By (author) Chris Chant
Genres: Second World War, Military intelligence, Military aircraft
Format: Hardback
Publisher: Amber Books Ltd, London, United Kingdom
Published: 21st Aug 2014
Dimensions: w 188mm h 247mm d 33mm
Weight: 1360g
ISBN-10: 1782742077
ISBN-13: 9781782742074
Barcode No: 9781782742074
Synopsis
Illustrated with outstanding color profile artworks, Allied Aircraft of World War II is the definitive study of the aircraft of all Allied powers from 1939 to 1945. Arranged in two parts - Allied Fighters and Allied Bombers - and then by theater of war, the book describes in depth the various aircraft for different nations, from the RAF to USAAF, from Soviet to the Brazilian Air Forces and many more. Featuring aircraft that served from Australia to the Aleutians, from the French border to Okinawa, more than 400 cooler artworks illustrate both the famous and the lesser-known aircraft (fighters, bombers, transports and reconnaissance) from a large array of services and nations. Types featured include the With information boxes accompanying the artworks, Allied Aircraft of World War II is an excellent reference work for modelers and any enthusiast with an interest in the history of World War II.