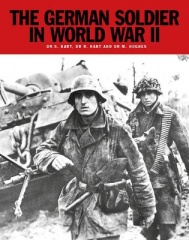 By (author) Russell Hart, Stephen Hart
Genres: European history, Second World War, Military history
Format: Paperback / softback
Publisher: Amber Books Ltd, London, United Kingdom
Published: 29th Feb 2016
Dimensions: w 189mm h 240mm d 13mm
Weight: 470g
ISBN-10: 1782743715
ISBN-13: 9781782743712
Barcode No: 9781782743712
Synopsis
No one can get past the German soldier. - Adolf Hitler For the first three years of World War II the German Army was a fearsome offensive organisation, capable of subduing countries in a matter of weeks. Even as the war neared its end, individual German soldiers earned great respect from their Allied opponents for their defensive capabilities and their willingness to fight hard to the end. The German Soldier in World War II uses rare and previously unseen photographs to show the reader what life was like for the German soldier in the frontline during World War II. Whether a tank crewman, panzergrenadier, motorcyclist or artilleryman, every German soldier had their own viewpoint in combat and the photographs in this book reflect that, showing how they fought together, often overcoming unpromising odds or better-equipped enemies. The book includes images of the Waffen-SS in action, and depicts combat from both the Western and Eastern fronts. The German Soldier in World War II is a graphic portrait of the life of the private soldier in the army of the Third Reich, containing first-hand accounts from German Army veterans who served in the war. This book is for anyone interested in the history of World War II and the Third Reich.