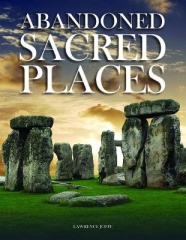 By (author) Lawrence Joffe
Genres: Photographic reportage, History of architecture, History of religion, Photographs: collections
Format: Hardback
Publisher: Amber Books Ltd, London, United Kingdom
Published: 23rd May 2019
Dimensions: w 229mm h 308mm d 28mm
Weight: 1375g
ISBN-10: 1782747699
ISBN-13: 9781782747697
Barcode No: 9781782747697
Synopsis
We may think of churches, mosques, synagogues and temples as ordered places for organized religion. But what happens when the congregation moves away? Or when shifting borders or persecution mean that people can no longer reach them? And, in the absence of humankind, what happens when nature's unceasing efforts invade the hallowed walls? Abandoned Sacred Places is a brilliant pictorial exploration of both ancient and modern temples, synagogues, churches, mosques and stone circles that have been left behind. From the mysteries around Stonehenge in England and Carnac in France constructed thousands of years ago to crumbling inner cities churches and synagogues in present-day Detroit and Chicago, from ancient Roman temples to Mayan pyramids in Mexico, and from Hindu temples lost in the Indian jungle to Buddhist shrines in the Chinese desert, the book shows what happens when humanity retreats and nature is allowed to reclaim the land. With 200 outstanding colour photographs exploring hauntingly beautiful locations, Abandoned Sacred Places is a moving examination of more than 100 lost worlds.