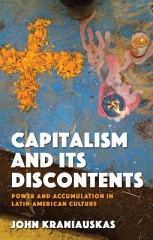 Capitalism and its Discontents

Power and Accumulation in Latin-American Culture

Submit your review
Newspapers & Magazines
'This major volume brings together a set of essays by one of the most stimulating writers in English on Latin American culture. John Kraniauskas boasts an astonishing critical and cultural range - in three sections and a series of chapters, he tours with consummate skill both canonical and less feted novels. His meticulous grounding in Marxist and critical theory allows Kraniauskas to study the experience of capitalism in Latin America, and in particular the relationship between literature as a cultural form and the role of the state. The resulting work will be of great importance to all those studying or researching Latin American culture and politics, and provides tools for wider disciplines, including literary and cultural studies.' - Professor Ben Bollig, University of Oxford. 'Capitalism and its Discontents is the result of a decades-long passionate engagement with Latin American cultural and political development. It traces a history of twentieth-century responses to the transculturating State-form. Writing - some writing - in the different grammars Kraniauskas exposes, undoes primitive political accumulation: such would be its function in its concrete Latin American determination. Critique is here state-critique, and thought is the sustained effort, nevertheless rare, to oppose history's violent engorgement. This is a deeply original work, one of those books whose disturbing imprint will change the approach to critical work on culture.' - Professor Alberto Moreiras, Texas A&M University.
Cookies are disabled, please note some site features may not function correctly.