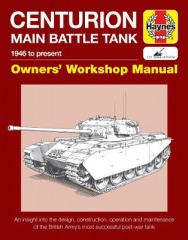 By (author) Simon Dunstan
Genres: British & Irish history, Motor cars: general interest, Vehicle maintenance & manuals, Tanks & military land vehicles
Format: Hardback
Publisher: Haynes Publishing Group, Somerset, United Kingdom
Imprint: J H Haynes & Co Ltd
Published: 24th Mar 2017
Dimensions: w 207mm h 278mm d 21mm
Weight: 740g
ISBN-10: 1785210572
ISBN-13: 9781785210570
Barcode No: 9781785210570
Synopsis
The Centurion is significant in the history of British armoured fighting vehicles as well as being one of the most important post-war Western tanks. Introduced into British Army service in December 1946, versions of Centurion were still serving with British forces in the Iraq War of 2003, some 58 years later. Centurions have also seen combat in the Korean and Vietnam Wars, in the Middle East wars, and in the Indo-Pakistan War (1965) where it fought against US-supplied M47 and M48 Patton tanks. The Haynes Centurion Tank Manual is published in association with the Tank Museum and has been written with full access to the museum's Centurion collection.