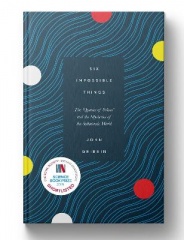 The 'Quanta of Solace' and the Mysteries of the Subatomic World

By (author) John Gribbin
Genres: Quantum physics (quantum mechanics & quantum field theory), Popular science
Format: Hardback
Publisher: Icon Books Ltd, Duxford, United Kingdom
Published: 4th Apr 2019
Dimensions: w 124mm h 200mm d 19mm
Weight: 230g
ISBN-10: 1785784994
ISBN-13: 9781785784996
Barcode No: 9781785784996
Synopsis
SHORTLISTED FOR THE ROYAL SOCIETY INSIGHT INVESTMENT SCIENCE BOOK PRIZE 2019. 'An accessible primer on all things quantum' - Sunday Times Quantum physics is strange. It tells us that a particle can be in two places at once. Indeed, that particle is also a wave, and everything in the quantum world can be described entirely in terms of waves, or entirely in terms of particles, whichever you prefer. All of this was clear by the end of the 1920s. But to the great distress of many physicists, let alone ordinary mortals, nobody has ever been able to come up with a common sense explanation of what is going on. Physicists have sought 'quanta of solace' in a variety of more or less convincing interpretations. Popular science master John Gribbin takes us on a delightfully mind-bending tour through the 'big six', from the Copenhagen interpretation via the pilot wave and many worlds approaches. All of them are crazy, and some are more crazy than others, but in this world crazy does not necessarily mean wrong, and being more crazy does not necessarily mean more wrong.

Submit your review
Newspapers & Magazines
'[A]n accessible primer on all things quantum ... rigorous and chatty.' * Sunday Times * 'Quantum physics is strange. These are the first words of John Gribbin's brilliant new book Six Impossible Things ... [a] pocket-sized analysis of the six most important interpretations of quantum mechanics.' * Engineering & Technology * 'Gribbin has inspired generations with his popular science writing, and this, his latest offering, is a compact and delightful summary of the main contenders for a true interpretation of quantum mechanics. It seems that after 35 years - since he first published his classic, In Search of Schroedinger's Cat - we are still looking. If you've never puzzled over what our most successful scientific theory means, or even if you have and want to know what the latest thinking is, this new book will bring you up to speed faster than a collapsing wave function.' -- Jim Al-Khalili 'Gribbin gives us a feast of precision and clarity, with a phenomenal amount of information for such a compact space. It's a TARDIS of popular science books, and I loved it. ... Gribbin manages to encapsulate what are sometimes very complex ideas in an approachable fashion. This could well be the best piece of writing this grand master of British popular science has ever produced, condensing as it does many years of pondering the nature of quantum physics into a compact form.' -- Brian Clegg, popularscience.co.uk 'Elegant and accessible ... Highly recommended for students of the sciences and fans of science fiction, as well as for anyone who is curious to understand the strange world of quantum physics.' * Forbes *
Cookies are disabled, please note some site features may not function correctly.