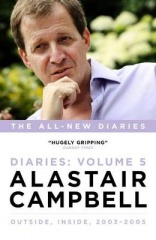 By (author) Alastair Campbell
Genres: Diaries, letters & journals, Politics & government, Memoirs, British & Irish history, 21st century history: from c 2000 -, Central government
Format: Hardback
Publisher: Biteback Publishing, London, United Kingdom
Published: 6th Oct 2016
Dimensions: w 155mm h 243mm d 53mm
Weight: 920g
ISBN-10: 1785900617
ISBN-13: 9781785900617
Barcode No: 9781785900617
Synopsis
THE ALL-NEW DIARIES; "Alastair Campbell's diaries have the quality of Pepys ...people will be looking for insights and finding them in 100 years' time." Lord Alex CarlileLaunched to a blaze of critical acclaim, Alastair Campbell's explosive diaries became an instant classic. Now, this eagerly anticipated new volume picks up where its predecessor left off, with Campbell standing down as Tony Blair's director of communications in 2003. Leaving Downing Street, however, isn't as easy as it seems, with Campbell persistently drawn back to the epicentre of power - often to the frustration of his partner, Fiona.As Lord Hutton prepares to publish his report, thus sparking a huge crisis for the BBC, any joy in No. 10 is dwarfed by continuing difficulties in Iraq. Meanwhile, the Blair/Brown relationship is fracturing almost beyond repair, and Campbell is tasked with devising a plan that will enable the two men to fight a united election campaign. At home, Campbell writes frankly of his continuing battles with mental health issues as he attempts to adapt to a new life beyond the confines of Westminster.Lifting the lid on the power battles at the heart of the Labour Party that sowed the seeds of today's turmoil, Outside, Inside is a vivid and compelling insight into modern political history, and a candid reflection on the personal impact of life in the corridors of power.

Submit your review
Newspapers & Magazines
"Endlessly fascinating... Alastair Campbell's diaries are a unique historical document, providing testimony from the day things happened, unedited by memory and hindsight." - John Rentoul, The Independent; "Hugely gripping" - Sunday Times; "This is the most fascinating of all the volumes. He is at the centre of everything but with a different perspective" - Steve Richards; "Unputdownable. [A] truly remarkable, fascinating and historic account. Could this be a record of Labour's last ever election win?" - Richard Madeley
Cookies are disabled, please note some site features may not function correctly.