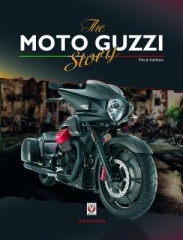 By (author) Ian Falloon
Genres: Motorcycles: general interest
Format: Hardback
Publisher: Veloce Publishing Ltd, Dorset, United Kingdom
Published: 1st Jun 2018
Dimensions: w 221mm h 274mm d 27mm
Weight: 1310g
ISBN-10: 1787111326
ISBN-13: 9781787111325
Barcode No: 9781787111325
Synopsis
The story of Moto Guzzi is a story of survival. As one of Italy's oldest, and most legendary marques, Moto Guzzi had seen the height of success during the 1930s, and then the 1950s when they dominated 250 and 350cc Grand Prix racing. Their withdrawal from racing coincided with a period of stagnation until the company was sold to De Tomaso in 1973. During the 1970s the V7 Sport and Le Mans were at the forefront of the new superbike era, and later, with Dr John Wittner's help, embraced contemporary technology with the 1000cc Daytona. If one aspect characterises Moto Guzzi it is continuity. The great 500cc Falcone single ran from 1950 until 1976, and the V7, originally seeing the light of day in 1967, continued well into the 2010s. This continuity breeds loyalty, and Guzzi owners are a fiercely proud breed. Guzzis are not like other motorcycles, even Italian ones, and to qualify as a Guzzi owner requires a dedication and individuality that will be rewarded in a long term relationship.

Submit your review
Newspapers & Magazines
This latest edition brings us bang up to date with the inclusion of the V85 concept seen in Milan in 2017. This is not a model-by-model exposition of the marque but is presented in the form of chapters representing either an era or an iconic model from the Mandello factory. Thus, the author covers the early days, racing success, the V7 and derivatives, while the Le mans and the Dr John machines get a chapter each. There is a wealth of information here for anyone interested in Moto Guzzi. The financial state of the company as it went from owner to owner and the story of the V8 racer are especially interesting. I was surprised by how many historical nuggets were to be found and there are plenty of pictures. This would make a grand gift for anyone who has recently acquired a Guzzi. Ot treat yourself. - Gambalunga. It is an excellent read and bang up to date, covering the still to be released V85 Adventure bike and with features on models and production details from 1921 to 2018. Virtually every question you could have about Guzzi's is answered. Whatever model you own you will enjoy this book. -Guzzi Parlante. As with all of their updates of older marque histories they have taken the original work first published in 1998 and modernised it, improving pictures and text where necessary without destroying the original factual tome. Just short of 300 pages it brings the story up to date and include all of this year's models. All the history is documented in the well-laid out and heavily illustrated pages, including information on their racing success during the 1930s, and then the 1950s when they dominated 250 and 350cc Grand Prix racing. Given the time span between the various updates, I would recommend any Guzzi aficionado to get a copy of this latest work in order to be ready to celebrate their centennial in a few years' time. - Ian Kerr. This book hits the coffee table with a real thud, and in it Ian Falloon successfully takes on the ominous task of telling the entire story of Moto Guzzi from its beginnings in 1921 right up to the present day. - Old Bike Mart. With the help of Moto Guzzi staff, past and present, and foremost Guzzi expert Ivar de Gier, leading motorcycle historian Ian Falloon presents a comprehensive history. Jonathan Hill - freelance
Cookies are disabled, please note some site features may not function correctly.