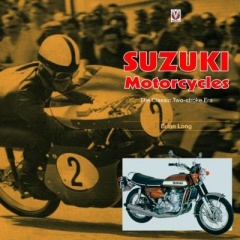 By (author) Brian Long
Genres: Road & motor vehicles: general interest, Motorcycles: general interest
Format: Hardback
Publisher: Veloce Publishing Ltd, Dorset, United Kingdom
Published: 1st Jun 2018
Dimensions: w 250mm h 259mm d 24mm
Weight: 1080g
ISBN-10: 1787112128
ISBN-13: 9781787112124
Barcode No: 9781787112124
Synopsis
Researched and written in Japan with the full co-operation of the factory, here in definitive detail is the story of the two-stroke Suzuki bikes - a series of models that put the company on the map, helping it to survive a difficult era that saw hundreds of Japanese motorcycle makers reduced to just four. Successful immediately, the two-stroke models defended Suzuki's honour on the tracks as well as in the showrooms, handing the company numerous world championship titles. The series has now been all but killed off, but this title helps celebrate an era when the two-stroke was king, concentrating on the 1950s through to the late-1970s.

Submit your review
Newspapers & Magazines
If you need to give someone a nudge for an upcoming Christmas present then try this one. Totally two stroke and more stink wheels that you can shake a dipstick at. From commuters machines to factory race bike and from toddlers to tourers it's a damn good read. Covers more Suzukis from 1955 through to 1978 than most of us have ever heard of. With 170 pages packed with facts and images it's a must for anyone who's a fan of the Hamamatsu brand. - Tansha. What a superb present this brilliant book by Brian Long will make for any an of Japanese classic motorcycles, and in particular Suzuki's wonderful two-strokes spanning 25 years since the very first postwar 30cc Atom and Power Free prototypes led to more robust models such as the 125cc Colleda and all that followed. Nostalgia simply oozes from the pages of this lively, colourful book which contains more than 500 colour illustrations of the bikes and bright sales pamphlets of a long-ago but nevertheless exciting age. A truly encyclopaedic. - Old Bike Mart. Brian Long's meticulously researched Suzuki Motorcycle's history book, rich in cross-referenced documents, The Classic Two-stroke Era 1955 to 1978 leaves almost no questions unanswered. - Motored News. Virtually every page is crammed with images of sales brochures, many in Japanese, and pictures of Suzuki models not seen in the UK before. The reason it is so comprehensive is that it was researched and written in Japan with the full co-operation of the Suzuki factory. With over 70 books to his name Long has developed a style of writing that informs without becoming so detailed you become bored, but by the same token he manages to impart a wealth of knowledge to the reader. Being the owner of a rare vintage Suzuki, he also shares that passion with the readership. Whether you are a two or four-stroke fan, or devotee of another marque, this book should be high on your reading list and then sit prominently on your bookshelf for reference thereafter! As with all Veloce published works the quality and presentation makes it well-worth the cover price. - Ian Kerr. Certainly a must-have for any Suzuki enthusiast, of which there are legions world-wide. Old Bike Australasia This is a thoroughly enjoyable book, which benefits greatly from the high-quality reproduction of original marketing material throughout. I hope it's the first of similar books by Mr Long on other Japanese bike brands: I'd buy them! Bike Rider Magazine. Brian Long's Suzuki Motorcycles-the Classic Two-stroke Era 1955 to 1978 is a unique contribution to the body of work that covers motorcycle history. For enthusiasts, it is a fun and informative read about one of the great brands on the market; for the collector or restorer it is a concise, thoroughly-researched resource. - Ultimate MotorCycling this book helps celebrate when the two-stroke was king - Race Engine Technology. The book is full of useful reference tables and many production figures. - Het MotorRijwiel. Researched and written in Japanby English author Brian Long, with the full co-operation of the factory, here in definitive detail is the story of the story of the two-stroke Suzuki motorcycles. - Jonathan Hill.
Cookies are disabled, please note some site features may not function correctly.