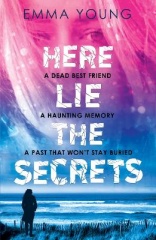 By (author) Emma Young
Genres: Thrillers (Children's/YA), Horror & ghost stories, chillers (Children's/YA), Family & home stories (Children's/YA)
Format: Paperback / softback
Publisher: Little Tiger Press Group, London, United Kingdom
Imprint: Stripes Publishing
Published: 28th May 2020
Dimensions: w 129mm h 197mm d 26mm
Weight: 254g
Interest age: From 13 to 16 years
Reading age: From 13 to 16 years
ISBN-10: 1788950348
ISBN-13: 9781788950343
Barcode No: 9781788950343
Synopsis
Mia's best friend Holly died when they were thirteen. But years later, Holly still hasn't left her. Spending the summer in New York, Mia is hoping to escape the visions of Holly that haunt her life at home. There she meets Rav, a parapsychology student, who convinces her to take part in a study into why some people see ghosts. Soon she is caught up in the investigation of Halcyon House, which is reputed to be haunted by a poltergeist. As Mia confronts her fears, what she learns about the house and herself will change her life forever. A tense psychological thriller for fans of ONE OF US IS LYING, A GOOD GIRL'S GUIDE TO MURDER and THIS LIE WILL KILL YOU.