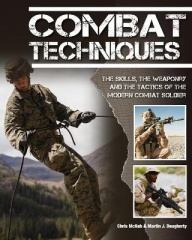 The Skills, the Weaponry and the Tactics of the Modern Combat Soldier. SAS and Elite Forces Guide

By (author) Chris McNab, Martin J Dougherty
Genres: Combat / defence skills & manuals
Format: Paperback / softback
Publisher: Amber Books Ltd, London, United Kingdom
Published: 18th Jun 2020
Dimensions: w 189mm h 240mm d 20mm
Weight: 536g
ISBN-10: 1838860150
ISBN-13: 9781838860158
Barcode No: 9781838860158
Synopsis
Combat Techniques is a comprehensive reference work on tactical procedures for infantry today. Illustrated with action photographs and detailed artworks, it provides a thorough insight into how the soldiers of today's armies would fight in any combat scenario they encountered. The book covers all aspects of the battlefield, detailing the various forces and assets at a battlefield commander's disposal, showing how tactics have changed since the end of World War II, and examining a huge range of tactical procedures, from controlling an air strike or firing an anti-tank weapon to sub-zero operations, hostage-rescue situations, fighting in urban or extreme terrain, amphibious assaults, and evading capture. The difficulties of asymmetric warfare are also addressed, with chapters on counter-terrorist and anti-insurgency operations. Using photographs and artworks, Combat Techniques shows the men and equipment of modern armies from around the world, and, with the help of an authoritative text, demonstrates how they operate in today's ever-changing, technology-dominated battlefields.