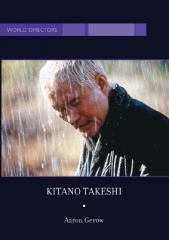 Submit your review
Newspapers & Magazines
http://www.midnighteye.com/books/kitano-takeshi.shtml The long-awaited publication of Kitano Takeshi, the first book-length study of the director's complete work, goes quite a ways to answering the question at the head of this review. Aaron Gerow - another man of incontestable credentials thanks to his stints teaching Japanese cinema at the University of Yokohama, Yale and his lengthy tenure as a film critic for the Daily Yomiuri - presents Kitano as an almost schizophrenic personality, made of two distinct personas: the director Takeshi Kitano and the comedian Beat Takeshi. Two personalities that are usually at odds, sometimes at war and occasionally in harmony. Both straight man and buffoon, Kitano forms a one-man manzai act. Gerow posits this duality as the key to analyzing and understanding Kitano's films. The opening chapter, entitled Introducing Two Takeshis, sets the stage, departing from a variety of opinions and attempts by other critics to pierce the mystery. In this chapter and throughout his book, the author makes ample reference to Japanese sources, which opens up a far wider reading of Kitano - one that includes the media personality Beat Takeshi of whom most westerners, including his fans and critics, still have only the slightest inkling, but which forms a crucial factor in understanding the man and his movies. At the same time, this use of Japanese sources also feels
Cookies are disabled, please note some site features may not function correctly.