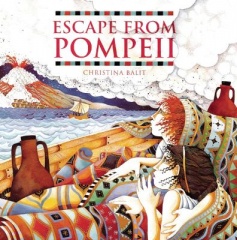 By (author) Christina Balit
Genres: Picture books, Children's & young adult fiction & true stories, Personal & social issues
Format: Paperback / softback
Publisher: Frances Lincoln Publishers Ltd, London, United Kingdom
Imprint: Frances Lincoln Childrens Books
Published: 1st Apr 2005
Dimensions: w 220mm h 256mm d 5mm
Weight: 165g
ISBN-10: 1845070593
ISBN-13: 9781845070595
Barcode No: 9781845070595
Synopsis
Travel back in time to view the eruption of Mount Vesuvius in the Roman Empire. Join Tranio, the son of an actor, and his friend Livia, the baker's daughter, in witnessing the eruption of Mount Vesuvius in AD79. Tranio, like most Roman boys, likes to watch whatever is going on: tradesmen selling their goods, ships unloading their exotic cargoes, politicians making speeches in the forum. But one hot August day a very different scene unfolds. The ground begins to shake, the sky to darken. People run gasping for air. Heading for the harbor, Tranio and his friend Livia hide on a boat and witness one of the most terrifying moments in recorded history-the eruption of Mount Vesuvius and the destruction of their beloved city, Pompeii. Although this book handles the sensitive subject of a tragic natural disaster, this book perfectly pitched for years 2 and 3. It is great in explaining the daily life of Romans from a child's point of view. Perfectly aligned to the KS2 curriculum, for those studying the Romans in school.

Submit your review
Newspapers & Magazines
"On the hillside overlooking the sparkling bay of Naples, the Roman city of Pompeii glimmered in the sunlight. From his window, young Tranio listened to the noise humming from bars, taverns, and shops around him . . . Beyond the massive city walls he could see Pompeii's greatest protector looming in the distance. They called it Vesuvius, the Gentle Mountain."
-- from the book
Cookies are disabled, please note some site features may not function correctly.