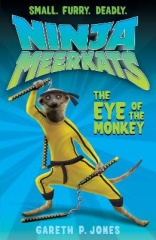 The Eye of the Monkey

By (author) Gareth P. Jones
Genres: Humorous stories (Children's/YA)
Format: Paperback / softback
Publisher: Little Tiger Press Group, London, United Kingdom
Imprint: Stripes Publishing
Published: 1st Jul 2011
Dimensions: w 117mm h 194mm d 13mm
Weight: 115g
ISBN-10: 1847151930
ISBN-13: 9781847151933
Barcode No: 9781847151933
Synopsis
Legend tells of the Clan of the Scorpion, four mighty meerkats who are armed to the teeth with ninja-know-how. They are sworn to protect the world from their longtime nemesis, the Ringmaster... An Indian emerald with mystical powers has been stolen from under the noses of the monkeys who guard it. The meerkats team up with kung fu supremo the Delhi Llama to investigate. Some monkey business is afoot and there's no prizes for guessing who's behind it... The meerkats smell a rat in a top hat. It's time for the ninja meerkats to leap into action!