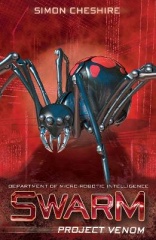 By (author) Simon Cheshire
Genres: General fiction (Children's/YA), Thrillers (Children's/YA)
Format: Paperback / softback
Publisher: Little Tiger Press Group, London, United Kingdom
Imprint: Stripes Publishing
Published: 7th Jul 2014
Dimensions: w 129mm h 198mm d 13mm
Weight: 160g
ISBN-10: 1847154387
ISBN-13: 9781847154385
Barcode No: 9781847154385
Synopsis
Project Venom is the second book in an exciting, action-packed new series, SWARM. The Secret Intelligence Agency has a new weapon: SWARM - artificially intelligent robotic bugs that act as undercover agents. Operating below the radar, they can fly faster, see further and sting harder! They won't stop until they've completed their mission, no matter what it takes. In the face of trouble, SWARM are armed and ready to fight. In Project Venom, the team are set a new mission: At the country's top research laboratory, SWARM suspect that one of the scientists has gone rogue. They uncover a sinister underworld and a deadly poison about to be unleashed. Can SWARM divert the villain's evil plan before the world is changed forever? Exciting stories of spying and hi-tech gadgets for readers seeking fast-paced action books that bridge the gap between Transformers and Alex Rider..