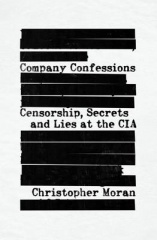 The CIA, Secrecy and Memoir Writing

By (author) Christopher Moran
Genres: Espionage & secret services
Format: Hardback
Publisher: Biteback Publishing, London, United Kingdom
Published: 5th Oct 2015
Dimensions: w 143mm h 288mm d 40mm
Weight: 1020g
ISBN-10: 1849548870
ISBN-13: 9781849548878
Barcode No: 9781849548878
Synopsis
Ever since it was created in 1947, the CIA has been anxious about people wanting to tell its stories. Indeed, its effectiveness as an intelligence service hinges to a large degree on its ability to protect sensitive information. As an oft-quoted CIA proverb neatly sums up: 'The secret of our success is the secret of our success.'The disclosure of sources and methods, information that has the potential to endanger lives and put the success of its operations at risk has always been regarded, understandably, as something to be avoided at all costs.How, then, is the CIA to acclimatise when this cherished rule is increasingly bypassed, with the memoirs of ex-CIA officers regularly reaching bestseller lists and being adapted for Hollywood?Using interviews, private correspondence and declassified files, award-winning author Christopher Moran examines how the CIA treads (and, some might say, oversteps) the fine line between justifiable censorship on the grounds of security, and petty, overbearing redaction for the sake of reputation. From stealing draft manuscripts to authorising its own programme of 'memoirs', Company Confessions details how the CIA grapples with the notion of secrecy when faced with the demands of an open and democratic America.

Submit your review
Newspapers & Magazines
'Despite frequent official disapproval, CIA staff have written more memoirs than members of any other secret intelligence agency in world history. Christopher Moran's brilliant account of their revelations and tribulations is both readable and revealing.' - Christopher Andrew; 'Moran interweaves colorful personalities, conflicting politics and inconsistent practices in narratives of what the US government has and has not permitted CIA authors to publish about their secret profession. A fascinating, readable work that explores America's never-ending efforts to balance necessary government secrecy with the public's right to know.' - Robert Wallace, co-author of Spycraft and The Official CIA Manual of Trickery and Deception
Cookies are disabled, please note some site features may not function correctly.