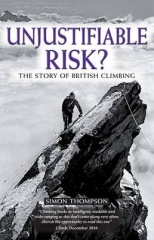 The Story of British Climbing

By (author) Simon Thompson
Genres: Sports & outdoor recreation, Climbing & mountaineering
Format: Paperback / softback
Publisher: Cicerone Press, Kendal, United Kingdom
Published: 21st Feb 2012
Dimensions: w 129mm h 198mm d 25mm
Weight: 460g
ISBN-10: 1852846798
ISBN-13: 9781852846794
Barcode No: 9781852846794
Synopsis
To the impartial observer Britain does not appear to have any mountains. Yet the British invented the sport of mountain climbing and for two periods in history British climbers led the world in the pursuit of this beautiful and dangerous obsession. Unjustifiable Risk is the story of the social, economic and cultural conditions that gave rise to the sport, and the achievements and motives of the scientists and poets, parsons and anarchists, villains and judges, ascetics and drunks that have shaped its development over the past two hundred years. The history of climbing inevitably reflects the wider changes that have occurred in British society, including class, gender, nationalism and war, but the sport has also contributed to changing social attitudes to nature and beauty, heroism and death. Over the years, increasing wealth, leisure and mobility have gradually transformed climbing from an activity undertaken by an eccentric and privileged minority into a sub-division of the leisure and tourist industry, while competition, improved technology and information, and increasing specialisation have helped to create climbs of unimaginable difficulty at the leading edge of the sport. But while much has changed, even more has remained the same. Today's climbers would be instantly recognisable to their Victorian predecessors, with their desire to escape from the crowded complexity of urban society and willingness to take "unjustifiable" risk in pursuit of beauty, adventure and self-fulfilment. Unjustifiable Risk was shortlisted for the Boardman Tasker prize in 2011.