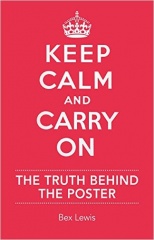 Keep Calm and Carry on

The Truth Behind the Poster

By (author) Bex Lewis
Genres: Poster art, Social & cultural history, Second World War, Gift books, British & Irish history
Format: Hardback
Publisher: Imperial War Museum, London, United Kingdom
Published: 20th Oct 2017
Dimensions: w 110mm h 170mm d 13mm
Weight: 184g
ISBN-10: 1904897347
ISBN-13: 9781904897347
Barcode No: 9781904897347
Synopsis
'Keep Calm and Carry On' has become one of the most recognisable slogans of the twenty-first century. But where is it from and why has it resonated so strongly with the modern British public? This book reveals the truth behind the now infamous poster, tracing its origins to the Second World War, when it was created to allay public panic in the event of a German invasion. Of course this feared invasion never happened, and the poster would have been resigned to the dusty shelves of history were it not for a chance discovery by the owners of Barter Books in 2001. Later seized upon as an encouragement in the economic crisis, 'Keep Calm' went on to become arguably the most successful meme in history. This book tells the story of that phenomenon, including colourful posters and archive photographs throughout.

Submit your review
Newspapers & Magazines
"This is a readable and enlightening introduction to an aphoristic phenomenon."-- "Times Literary Supplement"
Cookies are disabled, please note some site features may not function correctly.