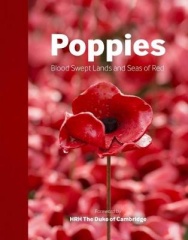 Genres: Photography & photographs, Military history, Gift books, Photographs: collections, General & world history, 20th century history: c 1900 to c 2000, First World War
Format: Hardback
Publisher: Imperial War Museum, London, United Kingdom
Published: 6th Sep 2018
Dimensions: w 197mm h 252mm d 27mm
Weight: 975g
ISBN-10: 1904897517
ISBN-13: 9781904897514
Barcode No: 9781904897514
Synopsis
The major art installation Blood Swept Lands and Seas of Red at the Tower of London marked one hundred years since the first full day of Britain's involvement in the First World War. Created by artists Paul Cummins and Tom Piper, 888,246 ceramic poppies progressively filled the Tower's famous moat between 17 July and 11 November 2014. Each poppy represented a British military fatality during the war. The poppies encircled the iconic landmark, creating a spectacular display visible from all around the Tower, which attracted more than 5 million visitors. The scale of the installation was intended to reflect the magnitude of such an important centenary and create a powerful visual commemoration. Featuring forewords by Paul Cummins and Tom Piper and stunning photography of the installation, The Poppies: Blood Red Lands and Seas of Red is the only official publication to mark this landmark event. As thousands of the poppies used in the installation tour the country during the remainder of the First World War Centenary, this publication will undoubtedly prove popular with visitors to both the Tower and the new venues alike.