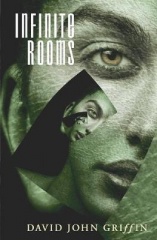 By (author) David John Griffin
Genres: Modern & contemporary fiction (post c 1945), Thriller / suspense, Fantasy
Format: Paperback / softback
Publisher: Urbane Publications, Rochester, United Kingdom
Published: 12th Jun 2016
Dimensions: w 150mm h 150mm d 20mm
Weight: 500g
ISBN-10: 1910692603
ISBN-13: 9781910692608
Barcode No: 9781910692608
Synopsis
Infinite Rooms is a terrifying thriller that follows one man's descent into madness. While narrating to a remembered psychiatrist, Donald Clement's inner reality becomes infused with surreal fantasy: Neptune rising from the sea; a giant showing the wonders of the universe; an incredible stranger who promises to reveal the secrets of infinity. As Donald falls deeper into the mental realm, so his protected memories are gradually revealed again, exposing the shocking truths he has been hiding...even from himself. Like a unique, mind-bending cross between Clive Barker and China Mieville, this is a novel of wonderful psychological terrors and fantastical dreams, as one man wrestles with the thin line between fantasy and reality.