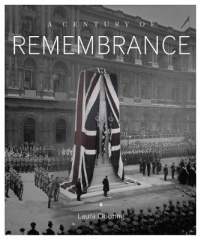 A Century of Remembrance

By (author) Laura Clouting
Genres: Military history
Format: Hardback
Publisher: Imperial War Museum, London, United Kingdom
Published: 1st Nov 2018
Dimensions: w 229mm h 254mm d 25mm
Weight: 1327g
ISBN-10: 1912423022
ISBN-13: 9781912423026
Barcode No: 9781912423026
Synopsis
The scale and nature of the First World War, and the manner in which the dead were treated, created conditions in which a very particular language of grief and remembrance of the war dead flourished. From imposing monuments and dramatic artworks to mantelpiece memorials and cultural outpourings, A Century of Remembrance explores the varied - and often surprising - ways Britain's First World War dead have been remembered. Richly illustrated with objects, photographs, documents and artworks from the unique collections of IWM, A Century of Remembrance examines he deeply personal ways in which people mourned their loved ones, and memorialised them, and examines the cornerstones of national-scale remembrance that took hold in Britain throughout the 1920s, from the poppy to the cenotaph.