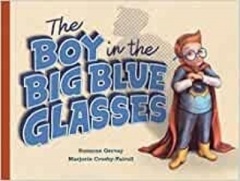 The Boy in the Big Blue Glasses

By (author) Susanne Gervay
Illustrated by Marjorie Crosby-Fairall
Genres: Picture storybooks, School stories (Children's/YA), Personal & social issues: self-awareness & self-esteem (Children's/YA)
Format: Hardback
Publisher: Exisle Publishing, Australia
Imprint: EK Books
Published: 1st Jul 2019
Dimensions: w 220mm h 292mm d 10mm
Weight: 420g
Interest age: From 3 to 8 years
ISBN-10: 1925335992
ISBN-13: 9781925335996
Barcode No: 9781925335996
Synopsis
Sam doesn't like his new glasses. They make his ears hurt. His parents say he looks handsome in them. But Sam just wants to look like himself. His teacher doesn't recognize him; she says he must be a new superhero. But Sam doesn't want to be a superhero. He just wants to be himself. At least his best friend George recognizes him and thinks he looks okay. Sam does everything he can to lose his glasses but they keep being found. And then things get even worse, and Sam has to cope with googly-eyed turtles and giant penguins! Eventually, with a bit of confidence and a lot of humour, Sam finds out that wearing glasses isn't so bad - and people still like him just the way he is after all.